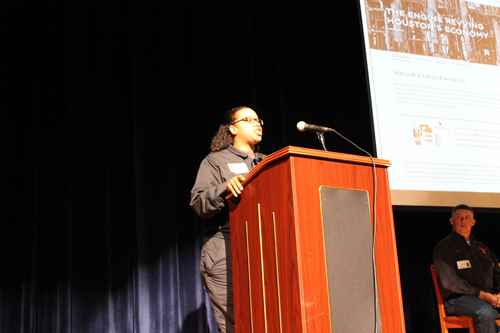 It’s hard to decide what you want to do with the rest of your life. It wasn’t until several years after graduating that I began to understand just how many different opportunities are available in the Houston region. It wasn’t until then that I also began to understand there are many paths to a successful career, and not all of them involve getting a four-year college degree.

I spent last Tuesday, September 26, back in high school. I spoke to the students of Aldine ISD about my job as a process operator at ExxonMobil. I told them that even though I pursued a four-year college degree after high school, I now have a rewarding career that would have only required a two-year degree to get started.

I had a friend who was working at ExxonMobil and loving it. She suggested I consider a career there, as well. I did some research about the possibilities and learned I could earn a better living and have more flexibility—both of which were important to me. My husband and I are raising two young boys, and I want to be able to spend as much time with my family as possible.

In October 2015, I took the aptitude test for the process operator career. In May 2016, I interviewed for the job and was hired three months later.

As a process operator in ExxonMobil’s Baytown Chemical Plant, I’m an essential part in creating the plastics and polypropylene used to make a variety of products shipped all over the world. My career requires a sharp mind and a hunger for a challenge. I often work with my hands, control sophisticated equipment and machinery, and troubleshoot to mitigate risk.

Not only do I love what I am doing, but my starting salary was $10,000 more than what I was previously making. After an exciting year on the job, participating in special projects and working overtime, I’ve managed to make almost $30,000 more than I did before joining ExxonMobil.

My opportunity at ExxonMobil has afforded me a great quality of life, a successful career path, and limitless potential to grow. I wish I had known about the many rewarding technical careers in the Houston area earlier. I hope young people coming out of high school these days will think about what they’re interested in and what they’re good at and consider all their options.