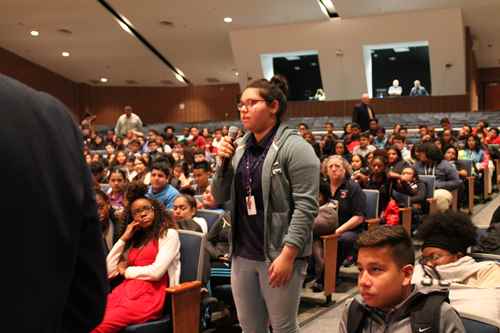 Students at Davis High School and throughout the Aldine Independent School District recently learned a surprising lesson from an unusual set of instructors. Senior executives from ExxonMobil and the Greater Houston Partnership, along with process technicians from ExxonMobil, came to Davis to tell students about the rewarding, well-paid careers available in key sectors of Houston’s regional economy—without a four-year college degree. Their comments were live streamed to ninth through 12th graders across Aldine.

The Greater Houston Partnership’s UpSkill Houston initiative has joined forces with Aldine ISD to help students and parents understand the multiple paths to careers that offer growth, stability, and good salaries, after just two years of education or training beyond high school. These careers are available in prominent Houston-area companies and sometimes require less than two years of additional education or training.

“The possibilities for you after graduation are truly limitless,” Aldine ISD Superintendent Wanda Bamberg told students at the Davis assembly to launch the Aldine-UpSkill Houston partnership. “The key is to know the many paths you can take to a fulfilling career and the steps to get started. That’s what our work with UpSkill Houston will help you understand,” she said.

ExxonMobil Process Operator Blake Bogie started in a different career right out of high school. But to support his family comfortably he had to work a good deal of overtime. With a baby on the way, he decided to enroll in a two-year degree program to prepare himself for a career in Houston’s petrochemical industry—where he’d be able to make more money and spend more time with his wife and son.

“I made more in the first year of this career than I did in almost the 10th year of my former job—and I get a lot more time off,” Bogie said. “That’s the best of everything. What’s more, there’s plenty of room for advancement.”

Now Bogie advises young people he meets to consider a career in petrochem. So does Akila Mukes, who’s also a process operator at ExxonMobil, working at the company’s Baytown plant.

“These positions provide you with an opportunity to have a great quality of life, to be successful, to move up the ranks, to be supervisors, and to support your family,” she said.

Mukes joined ExxonMobil after receiving her bachelor’s degree and working for several years in a different field. A friend introduced her to opportunities in the petrochemical industry. Mukes decided she liked the work, the flexibility it offered to raise children, and the increased income. Her starting base salary at ExxonMobil was $10,000 more than she had been making. With overtime and double-time on special projects, this year she’ll make $30,000 more than before.

Petrochem is expected to grow by 30 percent in the next 10 years, Bob Catudal, site manager at ExxonMobil’s Baytown Chemical Plant, told students. “Many of the products we all use every day—shoes, perfumes, paint, eyeglasses—contain materials that come from natural gas and crude oil processed by petrochemical companies,” he said.

“When you work in petrochem, you may help keep a plant running smoothly or design new ways to use petrochemicals,” Catudal said. “You may solve problems as part of a team or apply your skills in a solo setting. Regardless, you’ll have the potential to be successful over the long-term and make a difference in the lives of others.”

Fortunately for young people coming into the workforce, petrochemical manufacturing isn’t the only thriving industry in the Houston region, according to Peter Beard, who leads UpSkill Houston and serves as vice president for Workforce Development at the Greater Houston Partnership.

Beard listed six other sectors experiencing steady expansion and widely considered the drivers of Houston regional economy: advanced manufacturing, oil and gas, health care, construction, utilities, and port and maritime. He advised students to talk with their teachers, counselors, and parents about the many paths to a rewarding, well-paid career.

The Aldine ISD-UpSkill Houston partnership will continue through the school year and provide students with numerous resources that describe these careers and the pathways to achieving them.