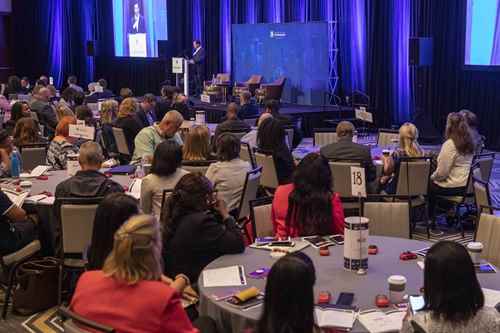 Business leaders, educators, and others should be doing all they can to come up with innovative ways to meet the challenge of filling so-called “middle-skill” jobs in Southeast Texas and beyond. That message came through loud and clear during last month’s summit hosted by the UpSkill Houston initiative of the Greater Houston Partnership.

The event at the Omni Hotel drew a large crowd and featured speakers from around the area and the country addressing the needs of employers as well as those seeking work. As you may be aware, middle-skill careers include jobs that require at least a high school diploma (or its equivalent) but less than a four-year degree. According to the group, participation in the UpSkill initiative has nearly tripled since 2014 including entities in business, education, community organizations and the public sector.

Some key challenges include the fact that certain skills are becoming obsolete more quickly, there is increased demand for digital skills, there’s a mismatch between job demands and credentialing programs, and there seems to be an uptick in elevated degree requirements that aren’t necessary in many job postings. For example, only 30 percent of executive assistants actually have a bachelor’s degree while 70 percent of job postings for that position say that such a degree is required.

“We believe UpSkill can build on positive momentum and further accelerate impact in the region by helping place students and workers in jobs that offer the highest possibility for career progression, helping employers find the right skills and reduce lead time to fill positions and retain employees, and by more fundamentally changing perceptions about middle-skill jobs,” said the organizers.

Much of the discussion centered on how to ensure the workforce has the digital skills needed to succeed in the coming years.

"Technology is going to change how we do every job in America," said Beth Cobert, CEO of the Skillful Initiative at The Markle Foundation. During a discussion with UpSkill Executive Committee Chairman Dan Gilbane, Cobert said “there is no doubt in my mind that every job will be different and will involve technology in some way."

Cobert talked at some length about the kinds of partnerships the Markle Foundation has in Colorado and Indiana with a focus on promoting middle-skill careers. Cobert said one of the foundation’s partners is a company called Aqua-Hot, which provides heating systems for recreational vehicles. The company’s leaders had to rethink their hiring process, she said. Put simply, the company was looking for people who understand hydraulics and came to the realization that diesel mechanics already have a good grasp on those fundamentals. “They changed the way they think about managing talent,” Cobert said. As a result, “They do not have the trouble they had before filling those positions,” she said.

Cobert said that when it comes to partnerships with companies and educators, “You actually have to live the values and not just talk about it.”

"There are many skills people have that are relevant and their insights will remain,” Cobert said. “But unless we can help them and they help themselves get access to new skills we're going to leave them behind and that would be both a terrible waste of their personal talent and frankly a terrible disservice to the companies who have helped them build those skills."

"People often use degrees in particular as proxies for skills and they're not very accurate and they tend to actually cut people out and filter people out as opposed to filtering people in," Cobert said. Cobert argued that because access is unevenly available to various formal education opportunities, workforce problems can be exacerbated by primarily focusing on degrees instead of skills.

Ryan Helwig, an economist and Principle at TEConomy Partners, based Ohio, said there are four major categories that stand out with especially strong demand for middle-skills in the Houston region: Technicians and drafters, extraction, transport/material moving and construction.

Middle-skill jobs in the region saw double-digit growth from 2010 to 2018 and account for a slightly larger share of regional jobs at 30 percent than the national average of 28 percent, Helwig said. Those jobs are also expected to continue to grow faster over the next five years, he said. "There's a whole host of demand and opportunity for those with a high school diploma to get that moderate to longer term job training," Helwig said. And these jobs are considered good-paying careers, including up to $74,000 annually for industrial production managers, up to $85,000 per year for construction managers, and $70,000 for registered nurses.

Construction "really stood out to us in this economy,” Helwig said, because of the "breadth of the need and the high demand that we're seeing.”

Peter Beard, Senior Vice President of Regional Workforce Development at the GHP stressed that people are the “backbone of any company. They are the backbone of our regional economy.”

40 percent of the existing workforce does not have the education or skills needed to fill middle-skill jobs, Beard noted. "How are we going to help them?" he asked and said, “The digital capabilities of individuals is going to become critical.”

Even more concerning, Beard said, is that a full 75 percent of the "incoming workforce" – or "flow" – may not have the education or skills needed to fill those middle skill jobs. "We have a challenge and we've got to think differently about how we're going to help young people find pathways into the regional economy looking for good jobs," Beard said. "And there are pathways."